If you’re travelling around the North Island this winter, Ohakune is a fantastic town to spend a weekend. Renowned for being the ‘Carrot Capital’ of New Zealand (and world famous for its giant carrot sculpture), Ohakune is located in the central North Island and is the gateway to the spectacular Tongariro National Park and Mt Ruapehu’s ski fields. 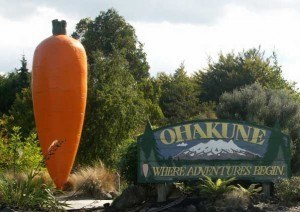 During the NZ winter ski season, skiers and snowboarders descend upon Ohakune as they make their way to the two largest ski areas in New Zealand: Whakapapa and Turoa. Following a day up the mountain, relax and enjoy the entertainment and great selection of bars and restaurants Ohakune has to offer.

If you prefer a more sedate activity, head to the Ohakune Mountain Road for a spectacular scenic drive through the alpine forests, up the slopes of Mount Ruapehu, past mountain streams, lofty rimu trees and tussock grasslands, and out to the ski fields 1620 metres above sea level. Magnificent views are guaranteed and there are plenty of walking tracks and points of interest to stop at along the way.

There are a variety of accommodation options available in Ohakune to suit all requirements and budgets, including luxury boutique hotels and chalets, B&Bs, motels, holiday parks and backpacker accommodation. During the winter season, it is highly recommended you pre-book your accommodation to ensure you don’t miss out.

Getting to Ohakune and around the central North Island is easy with a cheap rental car from one of our handy car hire depots. Our closest branches (with direction and approximate distance from Ohakune) are below:

Whether you’re looking for a compact hatchback, a spacious family vehicle or a minibus, we have something to suit your budget and requirements.