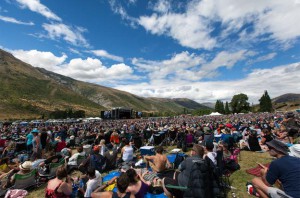 Summer’s here and the time is right for… well, outdoor festivals and concerts. At this time of year UK and US bands of bygone decades can either sit at home where it’s cold, weathering the financial drought and contemplating their tax dilemmas, or tour sunny Australia and New Zealand. These giants once strode the earth, commanding vast audiences and fees that might have fed an entire continent of starving children. Eventually the hype machine moved on to greener pastures, and they found their glistening bubble of success, groupies, chartered planes and limitless income replaced by the sound of only themselves, in a Ramada Inn, quietly strumming their expensive guitars.

That’s the end of the road for many, and most could (and should) retire, live comfortably off the royalty cheques, and show up on a talk show or fundraiser gig every few years. Twenty five years on, though, a peculiar thing happens. Someone decides that folks who crammed into stadiums in their teens and twenties might be receptive to a lightly reheated flashback. That those who had been there, done that, and bought the T-shirt, might be at a point in their lives where they could go there and do that again. And buy another T-shirt, because the old one seems to have shrunk. Last summer, bands including Foreigner, Heart, and Three Dog Night proved this to be exactly the case. Although touring with no current hits and only modest stage shows, 40,000 New Zealanders dug deep and bought tickets (and probably T-shirts) to see those three shows.

And the musicians? Well, the glow of the spotlight and a cash transfusion is hard to resist, even if the old glamour is gone. They are no longer really in the music business, they are in the nostalgia trade. Most of them look more like roadies these days, their unofficial uniform of black jeans/black shirts drawn snugly over their bay window bellies as they pay musical tribute to their younger selves. The stadiums are often replaced with that very adult venue – the vineyard. Very sophisticated, very mature – excuse the pun, but not very rock & roll. Audiences hold cell phones aloft instead of lighters. Every promoter’s press release is sure to contain the word iconic – iconic singer, iconic album cover, iconic hit song. The word is devalued and hollow. Sure, these bands can still play, but without the anticipation of hearing them on the radio for months, and the million dollar production values, their impact this time around is negligible.

So, who is coming to hibernate this summer?

UB40 used to be one band, now it is two. In spite of lengthy legal jousting over the use of the name, both UB40’s are still performing and one of them is coming to New Zealand for seven shows – the Red Red Wine vineyard tour – beginning Wednesday. The lineup we are getting includes original members Astro, Mickey Virtue, and lead singer Ali Campbell.  Although they are tetchy about being pegged as a covers band, it’s a fair call. Most of their hits are merely reggae tainted retreads of well known classics: Red, Red Wine (Neil Diamond), I Got You, Babe (Sonny and Cher), I Can’t Help Falling In Love With You (Elvis Presley), I’ll Be Your Baby Tonight (Bob Dylan), The Way You Do The Things You Do (The Temptations), and numerous others. Support acts for this tour are the excellent local reggae legends Herbs, and ex-Opshop singer Jason Kerrison. Tour dates are as follows…

…and tickets can be purchased through Eventfinda.

Huey Lewis and The News burst out of the San Fransisco scene in the early 80’s, all drape jackets and skinny ties, and soon had a slew of smart pop/R&B hits in their portfolio: Hip To Be Square, I Want A New Drug, The Heart Of Rock & Roll, Stuck With You, and the quite fabulous Power Of Love. The 90’s were less kind to them, with more personnel and record label changes than actual hits. They continued to tour and occasionally record though, and although Lewis’ voice seems to struggle with some of it these days, they do have a strong back catalogue to satisfy audiences with.

REO Speedwagon peaked in the early 80’s when they renounced their hard rock roots and began peddling soft-rock schmaltz. Songs such as Take It On The Run, Keep On Loving You, Can’t Fight This Feeling and other saccharine girlfriend music saturated the airwaves for most of the decade. When the sound finally fell out of favour the band reconfigured itself as a static museum piece, a touring 1984 jukebox. At least three of the five members from the hitmaking days remain, including lead singer Kevin Cronin, so audiences are getting the real thing.

Representing another kind of girlfriend music, I have seen Melissa Etheridge described as a smoky-voiced confessional songwriter. From the late 80’s to mid-90’s she belted out songs of romantic turmoil with sledgehammer subtlety, and performed to sold out, mostly female audiences. Her hits included Bring Me Some Water and the Grammy Award winning Come To My Window. A quick scan of recent YouTube offerings suggests that she is inclined to end her current shows with a tedious 10-minute-plus jammy rendition of Like The Way I Do. You have been warned.

Then on March 2 Aucklanders will have the chance to see the Violent Femmes at the St James, just before it closes for renovations. A little less mainstream (well, everything is less mainstream than REO Speedwagon), they are mainly remembered for their folk/punk pub favourite Blister In The Sun. Good band, great venue, and support by ex-Supergroove horn men Hopetoun Brown. Tickets…

Getting beyond summer, but worthy of mention, we also have The Buzzcocks on their 40th anniversary tour. More notorious than famous, these punk pioneers were nonetheless a big influence on later artists such as Radiohead. From March 16 – 19 they will hit Wellington, Dunedin, Christurch, and the Powerstation in Auckland. Tickets can be got here.

Another band to come out of the UK punk uprising is The Stranglers, best known for their sublime 1981 smash Golden Brown. With a latter day lead singer/guitarist these guys are still doing the business, and will be in Auckland, Wellington and Christchurch April 13 – 15. Tickets for Auckland are here, the other two shows, here.

Also on the horizon is a four date tour by bespectacled Scots twins The Proclaimers, when they will be performing their monster pub anthems I’m Gonna Be (500 Miles), I’m On My Way, and… I think that was it. Anyway, they’ll be here later in April, appearing in Auckland, Wellington, Christchurch and Hamilton. Tickets available here.

Enjoy the summer, enjoy the music, and enjoy the memories. Oh, and get the T-shirt.