Town Out Of Time

Where the hell was he?

Tex tilted his hat, shielding his burnished face from the low western sun, and squinted down the empty street. ‘WATERFALL MOUNTAIN’, read the lettering over the courthouse.  He didn’t care, anyway.  Saddle sore and weary from days on the trail, he ached for a drink, and his horse needed water.   He rode a final hundred yards to the Lucky Strike Saloon, dismounted, and slung the reins over the hitching post.

“Whiskey”, he said to the bartender, who stood with his back to Tex, absently cleaning glasses on his apron.  Without bothering to look around at his new – and only – customer, the bartender poured a shot and slid it across the bar.   Tex emptied the glass in one swallow.

“How far to Durango?” he said.  The bartender raised his eyebrows sharply and stopped polishing.

Mellonsfolly Ranch, missing only the tumbleweeds. Click to enlarge.

How far to Durango is hard to say, but an hour’s drive (or a day’s ride) from Ohakune in the central North Island stands the isolated township of Waterfall Mountain, New Zealand’s only Wild West luxury retreat.  For all the world like a leftover John Wayne movie set, the fourteen buildings are in fact three dimensional and fully functional.  A saloon, hotel, mining company, general store, telegraph office and bank are among the establishments you will find as you amble down the boardwalk.

Auckland businessman John Bedogni and his wife Kenda originally bought the 1000-acre bush block in Ruatiti Valley, naming it Mellonsfolly Ranch and setting out to build a private retreat.  The idea of doing it with a western theme appealed to John, and Kenda described the ensuing $5.5m project as a “log cabin that got away on us”.  The remoteness of the location meant dozens of builders lived on site during weekdays for the four years the town took to construct.

The finished resort, which opened in 2006, comes complete with its own backstory, as fictitious as the “wanted” posters adorning the Marshall’s office.  Charles Mellon (named for the Bedogni’s home suburb of Mellon’s Bay, in Auckland) discovered gold in the Ruatiti Valley in the late 19th century, and formed the Mellon Mining Company.  The town of Waterfall Mountain soon sprang up around it as workers and their families settled in the area, only to abandon it all when the mine eventually closed.  The buildings remained and were “restored” to serve as a luxury escape for private and professional groups.

What makes the Old West Town special, aside from the fact that it exists in the first place, is that it was clearly not conceived with an accountant’s unblinking eye on the profit margin.  The quality of the materials and furnishings would make a Hollywood set dresser blush.  The Bedogni’s filled containers with replica fittings and antiques found on buying trips to California, and technologies such as underfloor heating, sound systems and WiFi whilst present, are deviously disguised.  Guests are also encouraged to embrace the illusion to the full, suiting up in the period costumes provided and strapping on air guns. 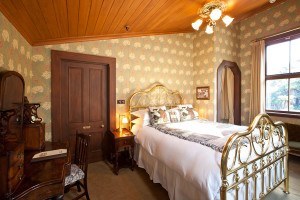 “I need a room for the night”, growled Tex.  “How much is yonder hotel?”

Tex nearly choked on his second whiskey.  “Them’s a fistful of dollars” he opined.

“All meals and complimentary activities included”.

“What if I wants to do some target practice?”

“Well, you can do that”, the bartender said, warily eyeing Tex’s six-shooters, “for a few dollars more”.

The ranch was sold to the Bartley Family of Wanganui in 2012, and is managed by Sarah and Miguel Bartley-Leguizamon who have renounced reality and live on site under their aliases of Rosita and Pancho.  Now with Day Tripper packages available the Old West experience is there to tempt anyone with a penchant for gunslinging, trail riding, poker playing, or just a hankering to see something totally unique.

See more, or make your own enquiries, here.  Reservations are essential.