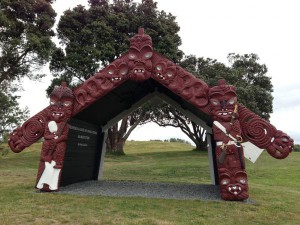 On the afternoon of 2 April 1864, 300 Maori men, women and children under the command of Chief Rewi Maniapoto, were holed up in the unfinished Orakau pa (fort). They had kept over 1400 British soldiers at bay for three days, but their supplies of water, food and ammunition were running perilously low.  Facing the choice of stay and be killed, or run and be killed, the occupants of the pa made a break for it en masse.  Giving chase across the open Waikato countryside, the British cavalry eventually gunned down at least 150 Maori, and wounded dozens more.

This confrontation became known as “Rewi’s last stand” (although Rewi himself survived to old age) and brought to an end nine months of brutal conflict between British forces and supporters of the Kingitanga (King Movement) over the fertile farmland of the Waikato region. Their stubborn refusal to sell land to the Crown was seen as a rejection of Imperial authority, and Governer George Grey prepared a crushing advance.

As is the case with most military conflict, the Waikato War incited rapid progress as well as destruction.  Summoned by the thousands to Auckland, the first task for the British regiments was clearing miles of bush, hewing out the Great South Road specifically in preparation for soldiers, supplies and horses to be deployed to the Waikato.

This sequence of battles and historic sites is now mapped out as the Waikato War Driving Tour, for anyone interested in this provocative aspect of New Zealand history.  Of course the great advantage of the self-drive concept is that you can move where and when it suits you, breaking the complete tour up over several days, or just calling in to a few locations as you pass through the area.  An app gives you access to GPS linked maps, plus commentary at each site using a smartphone or iPad, so it encourages some very interesting and spectacular detours from SH1.  A downloadable educational kit is also available to teachers conducting school trips through the driving tour.

Retracing, more or less, the advance of the Imperial forces, the tour begins at Auckland’s Highwic House, before swooping down the Bombay Hills, highlighting 13 locations overall and culminating in the fateful site at Orakau and finally Pirongia, both near Te Awamutu.  In addition to the online audio guides, five of the sites feature displays of illustrations and 3D models showing how the place would have appeared in the 1860’s, helping visitors visualise the standoffs whilst listening to the commentary.

Highwic, Newmarket, Auckland  Built in 1862 for wealthy colonial settler Alfred Buckland, who provided horses to the Imperial troops. Open as a museum since 1981. 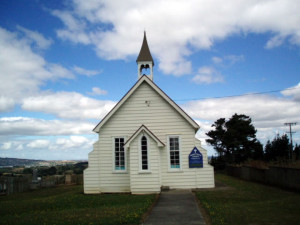 Pukekohe East Church  In 1863 the newly-completed church was hastily fortified, just before being attacked by a party of more than 200 Maori on September 14.  Although the church was riddled with bullet holes above the height of the fortifications, the 18 occupants managed to hold out until reinforcements arrived.

Pokeno Township Sidelined by the new Waikato Expressway in the 1990’s, Pokeno was, until then, a popular rest stop for an ice cream or a pie.  Originally called Pokino, it was the southernmost end of the Great South Road, and the huge Queen’s Redoubt was constructed here as the launching point for the Waikato invasion. The remains of the redoubt are in the centre of the present-day town.

Mercer Named after a fatally-wounded British officer, Mercer was the site of the first attack in the invasion on 17 July 1863.

Whangamarino  On a ridge affording spectacular views of the Waikato River, Te Teoteo’s pa was hurriedly constructed to repel the advance of British troops from Queens Redoubt. After several attacks the Maori warriors were forced to retreat south. British forces occupied the abandoned pa and built the nearby Whangamarino Redoubt from where they could shell the Maori position at Meremere.

Rangiriri  One of the bloodiest battles was fought at Rangiriri on 20 November 1863. The Maori defenders were well prepared for this attack, and British forces suffered significant losses. Maori only surrendered by mistake the following day when they falsely assumed that a white flag flying from a navy gunboat meant that the British wanted to negotiate. Several British soldiers are buried in a local cemetery.

Te Wheoro’s Redoubt  Originally part of the Maori Rangiriri defences, the captured the spot and built a redoubt on it, rebuilding over it once more a few years later.  The remnants of this later redoubt are now an Historic Reserve.

Ngaruawahia  Occupied by troops after the battle of Rangiriri in November 1863, see memorials to the Waikato war.

Paterangi    The Paterangi line has been called the greatest defensive line thrown up by either side in the New Zealand Wars, with the Paterangi pa being one of the strongest. Maori began work on the entrenchments soon after the fall of Rangiriri. Completed in late January 1864, the Paterangi line was supposed to halt the British advance south once and for all.  However, by the end of February the sheer number of British reinforcements summoned to the area forced Maori to abandon the site.

Rangiaowhia Focussed on defending Paterangi pa, Maori were not expecting an attack on nearby Rangiaowhia, a small settlement used as a supply base for the pa.  A daybreak shootout caused deaths on both sides.

Orakau   Site of the final, decisive battle in the Waikato War.

Pirongia  Originally named Alexandra, Imperial forces built the East and West Alexandra Redoubts here in 1864.  This marks the southern-most point of the farmlands the Kingitanga were so committed to defending. 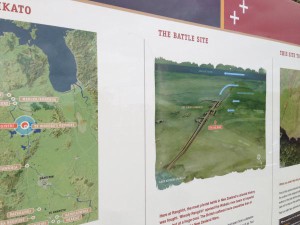 The tour is a remarkable way to discover, or rediscover, the Waikato region and the events that shaped it.  The tales of bloodshed and brutality are tempered with stories of great kindness and heroism on both sides, and many will take some enlightenment away from these.

Go directly here to Google Play or The Apple Store to download the smartphone version of the tour.  Search for Waikato War.  Note that the downloadable resources are approximately 50mb, so ensure you have a broadband connection first.