Bucklands Beach is at the northern end of a peninsula between the Hauraki Gulf and Tamaki River, just 13 km from central Auckland via hire car. This is a beach that offers sparkling white sand and safe swimming for all, which is a contrast to the wild surf and black sand of the west coast beaches.

Locals divide the beach into several sections. Big Bucks is the area north of the old yacht club at Grangers Point, and Little Bucks is the area south of the yacht club at Grangers Point. There is also Eastern Beach and The Back Beach, which is a series of small coves near the base of the cliffs, which are north of Eastern Beach.

Beyond the beaches at the headland near the end of the Tamaki River is Musick Point. This is a reserve that offers stunning views of both the inner Hauraki Gulf and the Waitemata Harbour. You will also see Rangitoto Island in the distance, which is well worth a visit. If you are planning a trip outside of the hustle and bustle of the city, consider travelling east to this gorgeous area. 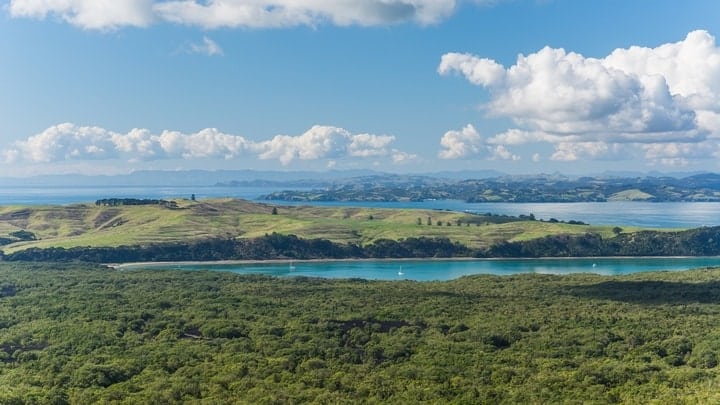 Howick Golf Club is a unique course with a magnificent view of the Hauraki Gulf. The golf course is designed for all golfers to enjoy and offers a combination of short and medium length holes. The course is open seven days a week, and through memberships are available, you do not have to be a member to enjoy the course. There is a very relaxed dress code at the course, and there are two 9-hole courses to make up the full 18-holes. Howick Golf Club has a pro shop on site, and golf equipment, including clubs and carts, are available for hire.

Murvale Reserve is located in the southeastern part of the area, and it is rich in both European and Maori history. When visiting, you will also notice a large raised knoll in the reserve, which is not only of historical significance as an excellent lookout point, it also will give visitors an exceptional view of Waitemata Harbour and the Hauraki Gulf. In its early days of European settlement, the land that Murvale Reserve sits on today was once a farm, but in 1854, the land was given to a local surgeon. It exchanged hands several times until it became a stud farm for Friesian cattle in the 1930s. It remained usable land until the 1960s when it was transferred to the council as a reserve.

Musick Point is a popular spot for visitors and locals, alike, and it is located on the headland of the peninsula. The name of this area was derived from a well-known aviator, Ed Musick, who came to New Zealand in 1937. The headland is also known by its Maori name, Te Waiarohia, as it was an ancient stronghold. Today, Musick Point is the home of the Howick Golf Club and the Musick Memorial Radio Station. People today also flock to Musick Point for sightseeing, recreational fishing and walking. It is also a very popular spot for wedding photos.

Rangitoto Island is visible from Bucklands Beach, and it is a popular day trip from Auckland. This is a large island and is approximately 2311 hectares. The volcanic landscape is home to more than 200 species of plants, moss and trees, and is the location of the largest Pohutukawa forest on the planet.

There are guided tours on the island, or you can take one of several walks. If you want to walk up to the summit, it will take an hour, but there are black lava caves on the way up, and they are open for exploration. When you reach the top, the views are nothing less than spectacular, and you can see everything from the islands of the Hauraki Gulf, the Waitakere Ranges and the Hunua Ranges.

Located north of Musick Point, you will see Browns Island in the distance. Experienced kayakers can easily reach the island from Crater Bay, and there are kayaking tours that leave throughout the Auckland area. There are no ferries that access the island, but private boats are available. This is a favorite location for bird watching, and if you make your way to the island, you may catch a glimpse of an oystercatcher or the endangered New Zealand dotterel. Fishing is allowed off the rocks or beach.

History lovers will find several interesting stops to make when visiting Browns Island including a preserved garden system made of stone, middens, which were rubbish dumps, and fish traps. All of these were left by the Ngati Tamaterā, who lived on the island for at least 600 years. The island was also owned by the Devonport Steam Ferry Company in the 1900s, and there are several ferry boat skeletons that remain on the beach, but they are only visible at low tide.

It can be difficult to walk through Browns Island, as the vast majority of vegetation on the island is Kikuyu grass, which is not easy to navigate. There is, however, a track starting at Crater Bay that will take you to the summit. It takes about 45 minutes to go up to the summit and back down.

Macleans Park is another ‘must see’ when in the area. This park, right on the water, is about 36 hectares in size, is very dog-friendly, and there are areas for picnics and playing, thanks to the children’s playgrounds. This is a beautiful place to spend a few hours, and you will have your choice of walking trails. The entire trail is approximately 4km, will take approximately 60 minutes to complete, and it is suitable for those of average athletic ability. Bird lovers also flock to Macleans Park to watch the native birds including pigeon, fantail, silver eye, grey warbler, tui and kingfisher.

Ferries leave daily from the Half Moon Bay Marina headed for the Great Barrier Island, and it is a certain trip for anyone who has found themselves in this area. The island is about three hours by ferry, and when arriving, you will feel as if you have stepped back in time. The roads are unsealed, though people do live on the island, and only a few shops are available.

The west coast of the island is steep and forested. The highest peak is Hirakimata, which stands at 621m. The east shore of the island has beautiful sandy beaches, wetlands and tidal creeks. Plant life flourishes on the island, and there are many birds and reptiles, some of which are threatened and endangered. These include the black petrel, brown teal duck, banded rail, North Island kaka, chevron skink and New Zealand dotterel.

You will find a number of walking trails here, some of which lead to waterfalls and natural hot springs. Longer walks will get you to the highest accessible points on the island, where you can see panoramic views of the unspoilt natural landscape.

If you are looking for an island that is a bit more modern, grab the ferry from Half Moon Bay Marina and head to Waiheke Island. This is New Zealand’s most densely populated of all the islands, and is known as the fifth ‘Best Destination in the World to Visit in 2016,’ according to Lonely Planet and Conde Nast calls it one of the ‘Best Islands in the World.’ What makes Waiheke Island stand out? Read on: 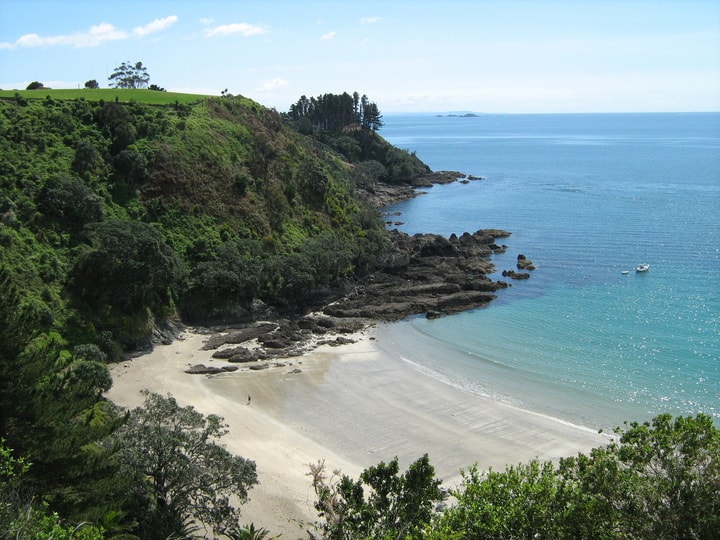 The beaches here are stunningly beautiful, many with bright blue water and white sandy beaches. The main beach here, Oneroa Beach, is near amenities such as restaurants and shops, and if you walk a bit, you will eventually come to Little Oneroa Beach, which is on the other side of a large group of craggy rocks. This is where you can interact with the locals and see a quieter side of the island. Blackpool Beach is best for windsurfing and kayaking, and Shelly Beach is a great place for families with children, as it is calmer and flatter than the other areas on the island.

Though many know of Waiheke Island for the beautiful landscapes, the wine is what many people stay for. This is known as the ‘Island of Wine’ to many New Zealanders, and there are more than 25 wineries and vineyards to visit. The area is well-known for its Bordeaux grapes, and the island winemakers often win awards for their Syrah. For travellers, thanks to the numerous wineries here, you will find that the wine is of high quality and inexpensive, simply due to competition.

There are many walking areas on Waiheke Island, and many work their ways around the cliffs, along the beaches and even into the native forests. If you are walking at the eastern end of the island, you may find the Stony Batter walkway, which will lead you into a historical system of underground tunnels and emplacements from World War II. You are free to explore these tunnels, so make sure to bring a torch if this is part of your itinerary.

Though Bucklands Beach is a far eastern suburb of Auckland, there is no reason not to travel there to see the sites. There is plenty to do, from viewing the landscape and playing on the beach to embarking on the next ferry from the harbour and sipping on some of the best wine New Zealand has to offer. This suburb is just a short drive from Auckland in your rental car, so take advantage of the experience, today.

Need transportation to make the most of the region? View our full range of affordable Auckland hire cars and explore the best of Auckland and beyond at your leisure.

Explore Auckland and Bucklands Beach at your own pace in an affordable hire car
from NZ Rent A Car.