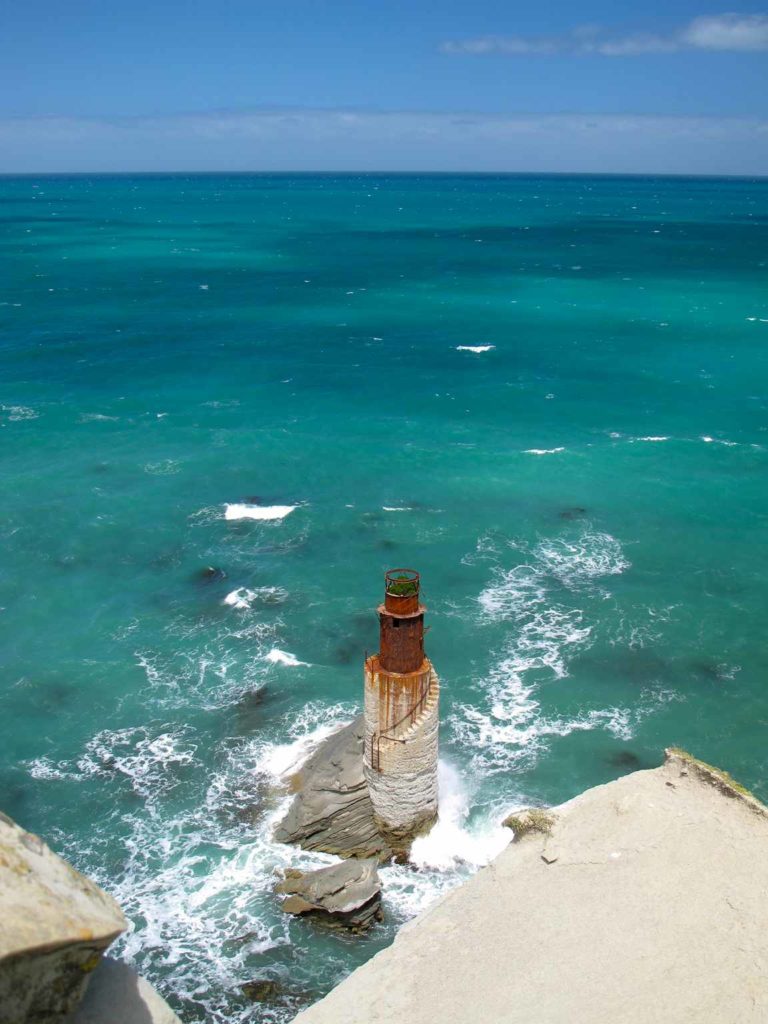 Tuahine lighthouse seen from the ridge. Contemporary reports state that there was never an outer handrail on that staircase, and the inner one barely had finger spacing between it and the tower wall. Photo: NZFrenzy

On a spit of headland north of Gisborne, presiding sightlessly over the Pacific Ocean and the Ariel Reef, stands the rust-stained column of the Tuahine Point lighthouse. If, like me, you enjoy scouting out abandoned man-made objects, it can be reached at low tide by carefully picking your way over rocks at the southern end of Wanui Beach, a popular surf spot. In the summer months, when Gisborne is the first city in the world to see the sunrise, the old lighthouse would surely have been a premier seat.

Rather like a maritime variant on the Three Little Pigs, this was actually the third in a series of ill-fated lighthouses built here in just six years. The first, an octagonal wooden tower constructed higher up the point in 1905, burnt down after less than three months service. A second attempt was made in 1909, with a far superior concrete and iron tower. This time it was not the lighthouse that failed, but the land under it. Within a few months a cave at the base of the headland collapsed, and ominous cracks appearing in the rocky outcrop caused fears that a landslide might send the brand new lighthouse crashing into the sea at any moment. The metal tower, lantern, and lighthouse keeper’s cottage were hastily removed and the base demolished. 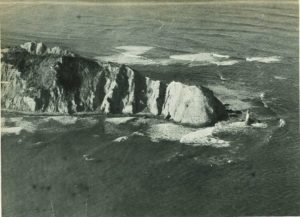 For lighthouse number three the Marine Department eventually chose a small islet of rock just off the point, and blasted the top off it before digging a cylindrical hole 4 metres in diameter and to a depth of 2 metres below sea level to ensure a secure foundation. On this incredibly exposed and uneven platform, one can only imagine how testing the conditions were as construction of the concrete pedestal progressed through the winter of 1911.

Equipment and materials were brought in by skillfully handled horses, which had to negotiate large rocks and surging tides, then hauled up a nearly vertical temporary tramway from the beach below. Freshly mixed cement was delivered to the islet via a jury-rigged cable car system of buckets and pulleys. Workers could only begin their shifts after abseiling down the cliff face on a rope, then crossing a rudimentary wire bridge that danced above a seething ocean. 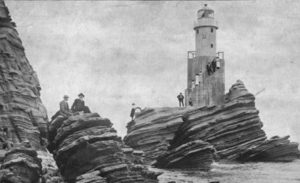 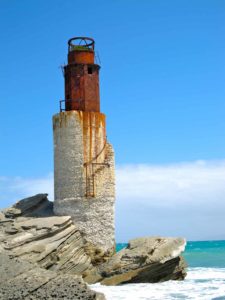 And from the same viewpoint in 2013, showing considerable erosion to the rocky foundation. Photo: NZFrenzy

Once the 13.5 metre pedestal was completed, the steel tower and the gas lantern salvaged from lighthouse number two could be installed. Access was only possible at low tide, however this was not a concern as the light would be unmanned – two cylinders of acetone fuel coupled together would enable it to flash continuously for up to 80 days. The new beacon stood 17 metres above sea level, could be seen for a distance of approximately 20kms, and it shone forth for the first time on October 16, 1911.

The lamp was extinguished for good in the 1950’s, to be replaced by an electric beacon mounted higher up on the headland. The old tower still stands true after a century of bearing the brunt of a formidable ocean, but the islet hasn’t fared so well, having lost several metres of material over the years. It’s only a matter of time before the Tuahine lighthouse topples into the Pacific – be sure to pay her a visit if you’re in the neighbourhood. 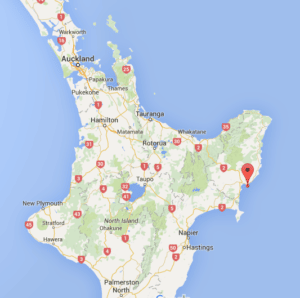 You can find the Tuahine lighthouse here.

For more east cape relics, dawdle up the coast to Tokomaru Bay in Ruin With a View.