When visiting Dunedin, one of the most popular tourist activities is to view and explore the historic buildings. There are many such buildings in the Dunedin area, and not only are they gorgeous to gaze upon, they also are used by the public and serve as government buildings, shops and even restaurants. You can see many of these buildings on foot, but there are also several must-see historic buildings that are accessible by rental car.

An Overview Of Dunedin’s Historic Architecture

Of all the cities of New Zealand, Dunedin has the largest concentration of Edwardian and Victorian buildings. This is mostly due to the rapid growth of the city just before and after the turn of the century, and the city’s slower growth rate into the present.

The area was largely settled by Scottish immigrants starting in around 1848, but it was slow to prosper until the 1860s when gold was discovered in Central Otago. Dunedin grew so quickly that only a couple of decades later, the city was the leading industrial and commercial centre of New Zealand.

It is possible to trace the roots of many of New Zealand’s most well known companies to Dunedin, and it is the first University City of New Zealand, which is the envy of the country thanks to the educational traditions and architecture.

In addition to the Edwardian and Victorian period architecture, you will also find Italianate, Gothic, Georgian and Palladian forms of architecture. Additionally, you will see that many of the buildings in Dunedin are constructed of local Leith Valley andesite, white stone from North Otago and Port Chalmers bluestone.

Throughout the years, much of the prosperity that Dunedin experienced following it’s founding has headed north, but the strong heritage of the city has remained, and more than one hundred years later, you can see and experience this around the Dunedin region. Here are several historical buildings of Dunedin that you should explore when visiting the area. 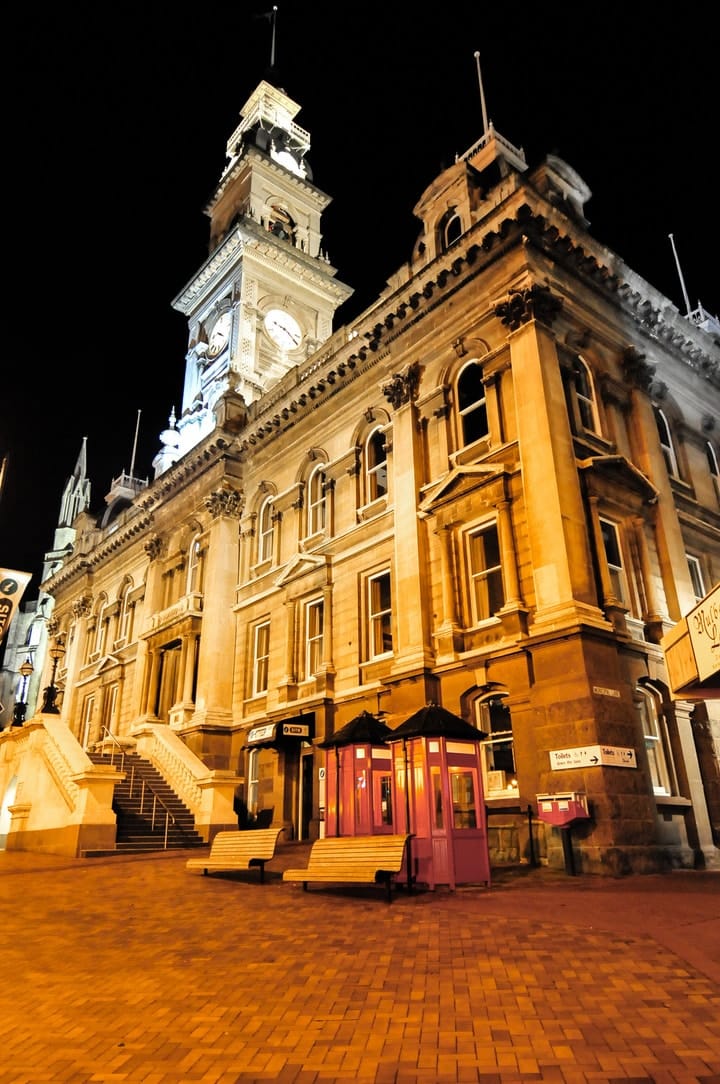 Located in Chingford Park in the North East Valley, the Chingford Stables are a Category I Historic Place. These days, the stables, which are made of basalt, are utilised for both public and private functions, but they were originally stables that were built by P.C. Neill in the early 1870s. The purpose of the stables was to house the horses of the business elite.

This is a large stone stable that is neo-Gothic. It has two stories, six gables and is the same size as a large house. The stables cannot be seen from North Road, which is the main access road, but can be seen within the park.

Columba College is home to a number of historical buildings of Dunedin including Bishopscourt. The house was built in 1872 by Bishop Nevill, the first Anglican bishop for Otago and Southland. He built it for himself, but he soon realized that he was unable to afford it after believing that the diocese would pay for it. Instead, Nevill decided to use it to house students who were training for the priesthood. Nevill and the diocese experienced more financial difficulty in 1877, so he chose to put the home up for sale.

Over the years, the home was owned by a Bank of New Zealand manager, John Wright, one of the founders of Wright Stephenson, and a farmer, Stuart Holmes. It was ultimately purchased by the Presbyterian Church in 1914. Today, Bishopscourt is a residence building at Columba College and it is listed as a Category I Historic Place.

The building is a large, gothic-style Dunedin bluestone house. It is an imposing building and patterned with grey and white stone. It is visible from the street, but partially masked from view by modern buildings.

Larnach Castle is quite possibly the most grandiose private home in the region. Though it is largely constructed in the Gothic Revival style, there is a number of other style features visible in the structure. The castle sits upon a hilltop on the Otago Peninsula and is visible throughout the area. It is a Category I Historic Place.

The castle and gardens are open to the public, and it has a well known, yet scandalous history. The structure was built by William J M Larnach, a prominent businessman, politician and banker in the Dunedin area. His family lived in the home, which was cared for by 46 servants. It sits on 35 acres of land with an additional 300 acres of farmland.

The large size of the building is imposing, and it is made even more so by the stone carvings of animals that flank the front entryway. Most of the stone for the Castle came from a local basalt quarry, but many materials were imported from overseas including Cornwall blackstone, Marseilles cobbles, Italian marble and Catlins timber.

Most of the exterior of the home has been restored to its original grandeur, and many original aspects of the interior, remain. Unfortunately, many of the outbuildings that were part of the original structure have been destroyed. There are areas that still stand, however, such as the stables, which serve as a lodging option for visitors. 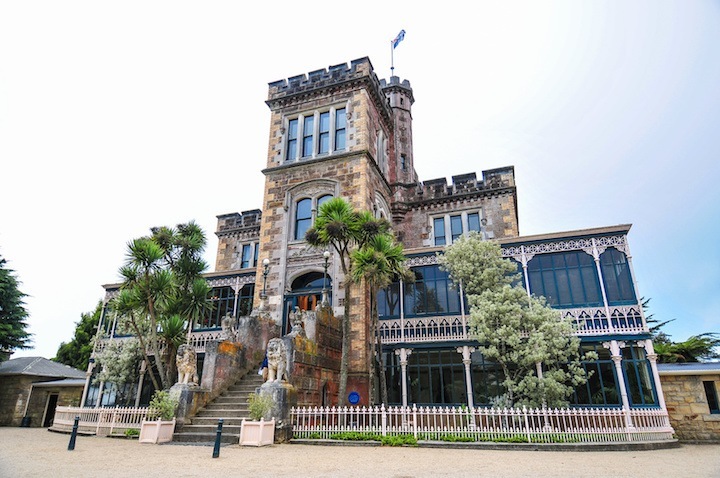 The Dunedin Law Courts are another must see historical building to see in Dunedin. There was a previous law courts building that once existed east of the present location. At that point, the Dunedin gaol stood where the present law courts stand today. The courts were later moved to the Provincial Council building.

The Dunedin Law Courts is in the late Gothic style, and only a few University buildings are later in the style category than this building. It is pure in its style, and it lacks any of the hybridisation that other buildings of this period contain. When visiting this site, make sure to view the other parts of the Castle Street precinct that include the Central Police Station, Florentine Railway Station and Otago Early Settlers building.

Lisburn House was built for James Fulton in 1864, and it is well known for its polychromatic bricks and steep pitched gable roof. Designed by Mason and Clayton, this is an early example of a home in the city, as James Fulton’s main residence was at a farm at West Taieri. Francis Fulton, his brother, lived at Lisburn House, too, as he worked in Dunedin.

The home is one and a half storeys and made of brick. It has a slate roof and features many steeply designed gables. There are marble floors on the inside, as well as an oval fireplace and a winding staircase. The property was sold in 1903 to the Story family, and sold again in 1944. This is a landmark home in Caversham, and it is easily seen from the Southern Motorway. Since 2000, Lisburn House is a luxury bed and breakfast and boutique restaurant.

The Otago Boys High School is a famous landmark in Dunedin, and it sits on a hill over the city. The school was completed in 1885, This is a neo-Gothic structure that has gabled wings that project out, and the addition of the ornamental turrets help to make this an excellent example of late Victorian architecture.

The school was constructed of three types of stone: Port Chalmers breccia, dark Leith basalt and Oamaru limestone. The contrasting colours of the materials brings a picturesque and lively appearance to the exterior of the building, a look that is typical of High Victorian architecture.

Speaking of Victorian architecture, other features of this period are also prominent including the corner turrets on the East Tower and the western battlements. The façade of the structure brings a castle-like feel to it. Today, the building contains a new theatre, which has lowered the earthquake damage risk and still kept the building functional.

The Otago Girls High School was the first secondary school for girls in the country, and it is likely the first built in the Southern Hemisphere. Construction was completed in 1871, but girls did not use the school until 1910. The architect, Edward Anscombe, though known for his Art Deco style, was able to create this example of the Gothic architecture with ease.

The school features a balanced façade and two matching gable ends. It also has a Tudor period tower. It is simpler in looks than other Gothic architecture, but still incorporates some features from the Edwardian era. The building is viewable from View Street, and from the road, you can see the bay window projection that is topped with some battlements. Near the building, there are other historic buildings including the Dominican Priory, the Trust and St. Joseph’s Cathedral. 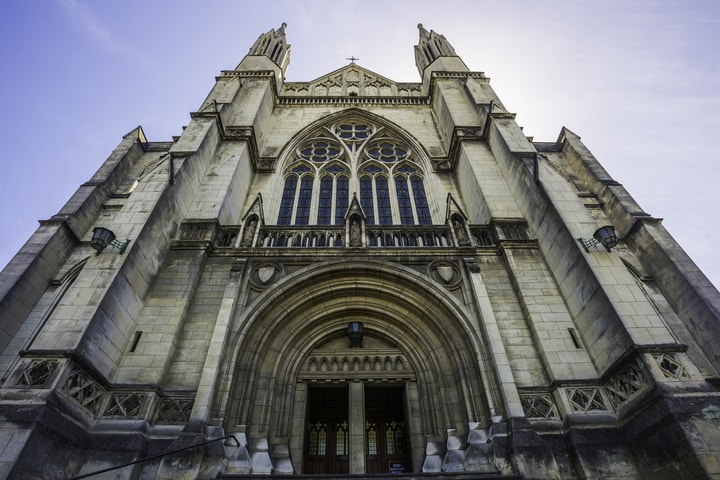 Dunedin is a modern city with a historic charm that is noticeable as soon as you arrive to walk or drive along the streets. Whether you choose to stay within the limits of Dunedin, or choose to take your rental car other other locations in the area, such as the Otago Peninsula, you are sure to find a number of historic buildings and architecture to view and explore.