One of the rarest penguins in the world calls New Zealand’s Otago Peninsular home. These birds are known for their distinctive yellow eyes and are also known as ‘Hoiho’ in Maori. 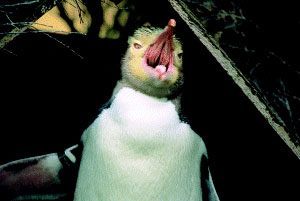 Yellow Eyed Penguins grow to around 75 cm and weigh between 5 and 6 kg. These penguins when young are covered in thick brown down followed by feathers and then when around 14-16 months old their adult plumage comes in.

Adults have the distinctive band of yellow feathers around their head and eyes, and of course the yellow eyes that easily identifies their species. Their bills have a red-brown tip and upper and are long and thin.

The body of the penguin is a grey-blue colour, while its belly and under the flippers is white. Male Yellow Eyed Penguins tend to be slightly larger in size than females.

Yellow Eyed Penguins exist on a diet of fish, including sprat, red cod and squid. They hunt during the day and travel distances of between 5-25 kilometres on average from the shore.

Hoiho are excellent divers and can go down to a maximum of about 150 metres in any one dive, but are more typically found at a depth of between 30-60 metres.

This penguins breeding behaviour differs from that of other penguin species in that it chooses to nest privately away from large groups.

Nests are usually set back from the shoreline in dense vegetation or bush and consist of shallow bowls filled with twigs, grass and other bits and pieces collected form the surrounding area.

The Hoiho live, on average, for about 8 years, though there have been instances where these birds have lived over 25 years.

Yes They Are An Endangered Species

Hoiho are officially classified as a globally endangered species and are in fact one of the most endangered penguin species in the world.

Their existence is being threatened by humans, stoats and ferrets, cats, dogs and even pigs in some cases. Natural water-bound predators include seals, barracouta, sharks and sea lions.

This human induced predation combined with natural predator behaviours has led to significant decline in numbers of breeding pairs and continued decline in population numbers, particularly in recent years.