Located on the north western tip of the South Island, Farewell Spit is essentially a very long sand bar known for its diverse wildlife, beautiful sands, stunning views and prominent position. Forming a protective arm around the western side of Nelson’s well-known Golden Bay, the Spit is an internationally recognised bird sanctuary and heavily protected nature reserve.

Well worth the scenic two and half hour drive from Nelson, Farewell Spit offers visitors the rare opportunity to see many species of birds, marine wildlife and diverse range of plants in a pristine natural environment. 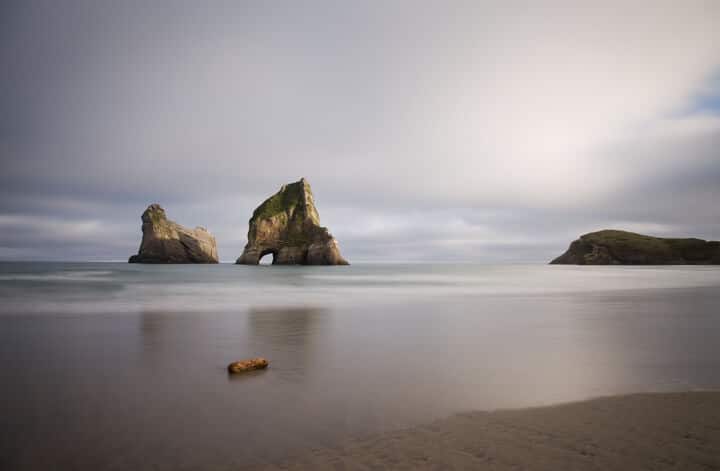 How Was Farewell Spit Formed?

At approximately 25-35 km in length the Spit is formed by the winds and waters of the Tasman Sea depositing the finer grains of sand that make their way northwards in the coastal drift. The Spit is continually growing and changing in the prevailing westerly winds and currents.

The spit is around a kilometre wide at its base and comprises mainly of shifting sand dunes, coastal vegetation such as marram grass, the rare sand sedge (Eleocharis neozelandica) and more common New Zealand native species including Harakeke, Manuka and various Coprosmas.

Sand and mud flats are laid bare at low tide on the southern side of the Spit revealing the greater extent of the land mass below the waterline. The highest points of the Spit sit approximately 30 metres above sea level.

Discovered by Abel Tasman in 1642 and officially named by Captain Cook 1770, Farewell Spit has enjoyed a colourful past. Early Maori occupied the area at Puponga Point, with evidence of the Pa site still visible today. The Spit was grazed by farm animals up until the late 1930’s after which grazing was limited to the Puponga Farm Park area. 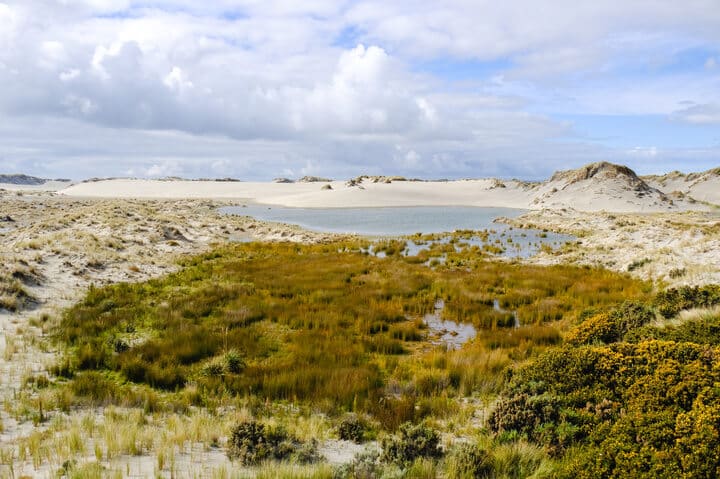 Farewell Spit is most notably known for its vast range of bird life. The number of birds present is largely due to its variety of habitats that provide excellent feeding and breeding grounds. The Spit is home to over 90 recorded species of birds including Spoonbills, Sparrows, Kea, Weka, Australasian Gannet, Caspian Tern, Southern Black-Backed Gull, the Variable Oystercatcher and many more.

Dolphin and whale stranding’s are common on the Spit, and Giant Squid, Sunfish and Oarfish have been known to wash up on its shores.

A lighthouse sits at the end of the Spit, first erected in 1870 rapid erosion led to it being reconstructed from more sturdy materials in 1897.

The Spit is now administered by the Department of Conservation with public access restricted to the first four kilometres. Tourist access to the rest of the Spit is by way of approved organised eco-tours only.

New Zealand’s Farewell Spit guided eco-tours help to reduce any visitor effects to the natural environment, they are only permitted to be carried out by Department of Conservation approved businesses. There is currently only one tour company licensed to operate on Farewell Spit. 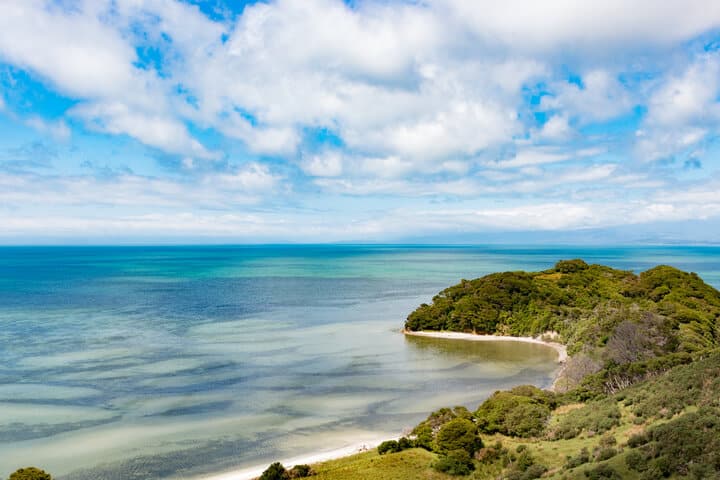 Departing from Collingwood, the Farewell Spit Tour company provides guided tours using customised 4WD buses. A tour commentary is complimentary on every trip, tour guides will explain the unique ecology of the location, its history and also answer any questions you may have.

The popular Farewell Spit Tour includes the opportunity to explore the lighthouse end of the Spit on foot, Fossil Point and a stop in Puponga along the way. Departing from Collingwood this tour takes approximately 6.5 hours including the return trip. Adult tickets cost $155 and children $58.

The Gannet Colony Tour travels beyond the lighthouse and on to the very tip of the Spit. The last 20 minutes of the trip is on foot, allowing you to get excellent views of the gannets as they nest and care for their young. This tour is limited to 20 people per day and costs $165 per adult and $58 per child. This tour departs from Collingwood and also take approximately 6.5 hours return.

The Wader Watch Tour is only run in the summer months between September and April and is restricted to four people per tour. The tour allows visitors to view the vast expanse of the mudflats exposed by the descending tides and many of its inhabitants and other opportunistic wildlife taking advantage of the tidal flows. Adult tickets are priced at $130, children at $120 the tour departs from Puponga.

Due to the exposed nature of Farewell Spit weather conditions can be changeable and brisk winds are to be expected. Even though tours are conducted within the comfort of 4WD buses it is advisable to bring the following items:

It is also a good idea to bring along binoculars if you wish to optimise viewing opportunities, and don’t forget the camera!

What You Need To Know

When visiting Farewell Spit it is important to keep in mind the following.

Farewell Spit is definitely one of those must-visit New Zealand destinations, it’s a great trip to combine with enjoying the wonders of the Abel Tasman National Park.

Need transportation to make the most of the area? View our full range of affordable Nelson rental cars and explore the best of Nelson at your own pace.

Back to Nelson Photograph Gallery

Explore Nelson at your leisure in an affordable rental car from NZ Rent A Car.