As the self-styled “adventure capital of New Zealand”, many people from all over are drawn to Queenstown for its range of adrenaline-inducing, blood-pumping pursuits. On this page you’ll find a handy guide to some of the best Queenstown adventure activities.

Queenstown is the home of bungy jumping in New Zealand. Popularised by local legend AJ Hackett, this death-defying extreme sport involves a vertical free fall while attached to what is basically a giant elastic cord. There are three main bungys available in Queenstown; ‘The Ledge’, the Kawarau Bridge, and the Nevis bungy. Each Queenstown bungy jump has its own flavour. The Nevis is the highest bungy in New Zealand, with a massive 134m free fall.

The Kawarau Bridge jump is the “World Home of Bungy’, being the first commercial jump to have opened (all the way back in 1988). The Ledge uses a unique harness system that does not require your feet to be tied, meaning that you can do flips, tricks, and stunts that would not be possible on a normal bungy jump. If you’re visiting Queenstown and are in the mood for adventure, then you need to give bungy jumping a try. 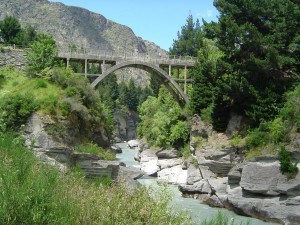 The Shotover River, where you can enjoy an exciting ride on the Shotover Jet.

The Shotover River is a fast-flowing, 75 kilometre ribbon of water that flows from the Southern Alps to the Kawarau River. Once one of the richest gold bearing rivers in the world, it is now popular as a tourist and adventure sport destination. In particular, the world-famous Shotover Jet has been thrilling visitors from around the globe since 1970.

Feel the excitement as you blast down the Shotover River and through its many canyons in a high-powered jet boat driven by a skilled professional. You’ll hit speeds of almost 90km/h as the ‘Big Red’ jet boat dodges between rocky outcrops and tight twists and turns.