What a lot of people do know is that it has the world’s steepest street and a chocolate factory, and every July Dunedin-ites manage to combine these two attributes at the Cadbury Chocolate Carnival. 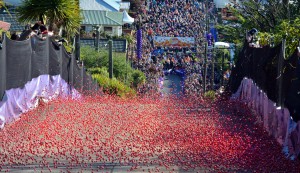 From July 16 to 22 Cadbury will host over 50 events with confection connections in Dunedin, and expects to lure about 62,000 chocoholics to the city. This will be the 16th annual carnival, and this time around you can treat yourself to cooking classes, choc-tacular art and fashion exhibitions, chocolate and beer matching at Speights brewery, a chocolate facial, body polish or manicure at Erban Spa, and many more diabetes-inducing activities. You’d be a fool to not take a tour of a real chocolate factory at Cadbury World, and there’s a trip on the Crunchie Train on the Taieri Gorge Railway, which we quite coincidentally wrote about just last week.

The festival finale is traditionally the Jaffa Race. For those unfamiliar with this sublime Kiwi delicacy, Jaffas are balls of chocolate with an orange shell, proudly produced and consumed in New Zealand since 1931. On July 22nd 75,000 of them will be released at the top of Baldwin St, the worlds steepest residential road, and bouncing, rolling, and ricocheting to the bottom like a delicious orange tsunami. Visitors can buy numbered stickers for $1 each (the money goes to charity) to stick onto a Jaffa, and can receive a prize if theirs is among the first over the finish line. There are three races of 25,000 Jaffas scheduled, with proceeds for race 1 going to Make-a-Wish, race 2 going to Surf Life Saving New Zealand & race 3 going to Parent Centre New Zealand. 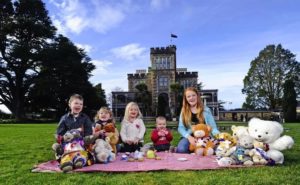 Dunedin was originally established by mostly Scottish immigrants, and is known as the Edinburgh of the South thanks to the well-preserved Victorian and Edwardian architecture inspired by their hometown. If you are making the pilgrimage this month, don’t forget that the city has many other attractions which, although sadly not chocolate related, are unique and marvelous nonetheless. Larnach Castle and Olveston Historic Home are almost compulsory tourist destinations, there’s the nearby seaport town of Port Chalmers, and wildlife lovers can see albatross and penguins on the Otago Peninsula.