Nestled in the heart of the South Island is New Zealand’s own Dark Sky Reserve, a first for the southern hemisphere and, at 4300 square km, the largest in the world. Established in 2012, it signifies a commitment to preserve not just our land and marine environments, but the views above us. This is significant as our ability to see starlight is inversely proportional to the amount of what stargazers call “light pollution”, the interference of man-made light sources. This, combined with the rise in air pollution have had a major effect on what the suburban amateur can see – a far less stellar experience than our grandparents would have had.

The area chosen for the reserve was the MacKenzie Country, a desolate corner of Canterbury with its own stories to tell. It was named after a Scottish sheep rustler who was captured several times but repeatedly escaped confinement, becoming a folk hero in the process. James McKenzie’s territory has changed little since his escapades in the 1850’s, its barren plains and vast sheep stations have survived a century and a half of progress, and happily the new reserve will limit any future developments. It’s also home to the University of Canterbury’s Mount John Observatory, making it an ideal location for such a reserve, and thanks to these efforts there are very few places on earth from which so many stars can be seen – up to 50 million on a clear night.

In order to showcase this new reserve as both a national and international attraction the Aoraki MacKenzie Starlight Festival was staged for the first time in October 2013. Organised by the University of Canterbury’s physics and astronomy department, it drew hundreds of visitors to the tiny township of Lake Tekapo and featured a mix of cultural, scientific and educational activities.

The creation of the reserve will be celebrated for a second time from October 9 – 11 this year, and will be held at the Twizel Events Centre, with some events at Lake Tekapo and Mt Cook Village. As well as promoting the reserve – and New Zealand – to astrological communities around the globe, the festival will also mark 2015 as the International Year of Light (IYL2015), as declared by UNESCO (The United Nations Educational, Scientific and Cultural Organization), with the support of the UN, the European Physical Society and the International Astronomical Union. The University of Canterbury is still involved in organising this year’s outing, in partnership with Aoraki Mackenzie International Dark Sky Reserve Board.

There will be two principal guests at this year’s festival. Dr Seth Shostak, from the SETI Institute in California, has written and spoken extensively on astronomy the search for extraterrestrial intelligence. Chris Lintott is Professor of Astronomy at Oxford University, England, and hosts the BBC’s monthly TV show ‘Sky at Night’. He has published two books on astronomy and galaxy formation co-authored by the late Sir Patrick Moore and Brian May. Yes, that Brian May. The ex-Queen guitarist also happens to be a doctor of astrophysics.

Once again the event is aimed at educating and entertaining students and families, as well as more seasoned astronomy enthusiasts. The focus is on the study of stars and outer space, the night sky, the problems of light pollution, and will include a variety of activities such as: 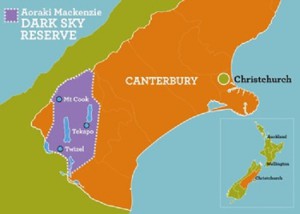 How To Get There

Twizel is a tiny, remote town, accessible only by road, not rail or air.  It’s about  three-and-a-half hours drive from Christchurch, the nearest international airport.  If arriving at Christchurch you the most obvious thing for us to do is recommend that you contact our Christchurch Airport Branch for a suitable rental car or minibus, or any one of our seven South Island depots.  Bus services are also an option with providers such as InterCity bus service, Atomic Shuttles, and Cook Connection.  Once you’re in Twizel, festival organisers have arranged bus transport to the events in Lake Tekapo and Mt Cook for those who require it.

There won’t be a Hilton Hotel in Twizel, but there is a range of smaller options: motels, holiday parks, B&B’s etc.  A reasonably complete list appears here.

Tickets for some activities are available through Eventfinda, however many events are free.  The programme for the Aoraki Mackenzie Starlight Festival and other information can be seen (with the naked eye) at www.starlightfestival.org.nz.