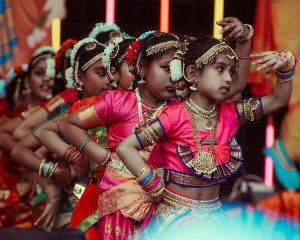 “Spice Up Your Life”, urge colourful posters for Diwali, the Hindu festival celebrating the triumph of light over darkness, and good over evil.  The exact significance of the festival varies in different parts of India, however much like the way Christmas is celebrated by millions of non-Christians, the Diwali festivals are accepted around the world as a broad, more or less secular showcase of Indian culture.

This means visitors can sample Indian music, traditional and Bollywood dance, storytelling, games, amusement rides, puppet and theatre performances, and attend art & craft workshops, including workshops for kids. India’s great global ambassador, its cuisine, will be well represented by scores of food stalls as in previous years. Interestingly, the Diwali festival in Auckland is said to be the city’s largest vegetarian event.  Appropriately for a festival of lights (Diwali is sometimes called Deepavali, or “row of lamps”) the Auckland event concludes with a fireworks display on the Sunday night.

The Auckland and Wellington festivals are organised by the Asia New Zealand Foundation in conjunction with the local councils, and have been annual events since 2002.  Turnouts have risen dramatically since the early festivals, reflecting a growing Indian population as well as growing acceptance and interest in Asian culture in among New Zealanders.  Now, along with Pasifika and the Chinese Lantern Festivals, Diwali has become one of New Zealand’s biggest ethnic attractions, and for 2015 the Foundation has invited two international acts to New Zealand to perform at both festivals—folk-dance group Mudra Creation and a puppet troupe led by master puppeteer Mahipat Kavi.

These are free events – free entry, smoke-free, alcohol-free – and suitable for all ages. Details are:

Be aware that the council is closing Queen St next to Aotea Square (between Mayoral Drive and Wellesley St) from late Friday evening until 5am Monday. Consider taking the bus, train, or ferry to the city, car parking is likely to be at a premium.

Whilst you’re meandering around Queens Wharf, I strongly suggest you visit this and pay your respects.

A number of smaller local events are being independently staged around New Zealand – it’s worth a Google if you can’t make it to one of the main centres.