Katy Perry Gets Prismatic At The Vector 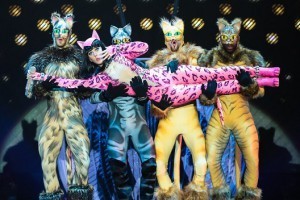 Pop icon Katy Perry brings her Prismatic World Tour, and international smile, to New Zealand in December, just in time for a few thousand teens to beg for tickets as early Xmas presents.  At the time of writing, her Vector Arena show on the 19th is sold out, and a second and final show on the 20th is well on its way.  Like Justin Timberlake this week gone, Ms Perry is only appearing in Auckland, leaving fans elsewhere in the country to book planes, trains, hotels and rental cars as well as concert tickets.  Oh well, at least it can be tied in to visiting rellies in Auckland over the holidays.

In August I wrote some recommendations for getting to the Vector for the Justin Timberlake shows.  These will apply again verbatim for Katy Perry, so here they are:

“Vector Arena unfortunately has no on-site parking, however their website does offer a comprehensive guide to all the possibilities.  It rather hearteningly assures us that “…for those who choose to drive, there are approximately 7,000 carparks within a 1.2km radius.”  Of course these are public parking buildings, at least partially taken by workers or people visiting the many other attractions in the CBD, and the Vector seats 12,000.

I have had good fortune in the past parking for free on Gladstone Rd in lower Parnell, a few minutes walk but not much further than the other parking options.  Of course it’s a gamble, and the later you arrive the further you may have to hike.  Still, the money you save can go towards the T-shirt, the CD, the dinner, the drinks…

Vector do offer a bus service to out-of-towners dubbed Live Show Express, which provides return transport to the venue from specially selected North Island cities.  Umm…Tauranga and Hamilton, that’s you.  See their website for more information.”