Judged by Time magazine to be one of the 5 must-do events of 2013, the Burt Munro Challenge is back for 2014 and expected to attract amateur motorcyclists from all over Australasia.

Now in its ninth year, the event is organised by the Southland Motorcycle Club and has evolved into a major New Zealand motorsport event. This year it will be comprised of seven races run between November 26th and 30th, on racetracks, roads and beaches in deepest Southland. Named in honour of a local legend who set a world speed record on the Bonneville Salt Flats, Utah, at the age of 68, a special “Competitor of the Year” trophy is awarded by the Munro family to the participant who demonstrates traits the Burt was known for: determination and passion, performing their own maintenance, resourcefulness including making their own parts.

Born in Edendale, a small town north of Invercargill, in 1899, Burt purchased a new Indian Scout motorbike in 1920, a machine capable of 55mph (89kmh). Tinkering with it over countless nights and weekends, he soon began racing it successfully in an astonishing variety of local competitions – quarter miles, hill climbs, beach races and economy runs – before setting his sights on the world stage in 1962. He eventually set a record, still unbeaten, of 183.586mph (295kmh) in 1967. By this time virtually nothing was left of the original bike, Burt had customised and fabricated almost every component, designing, casting, forging and machining replacement parts as the stock ones disintegrated. 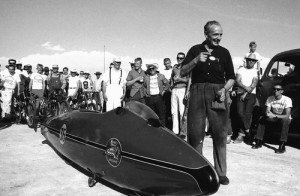 The achievements of this elderly Kiwi on an almost equally ancient bike only became known to the general public when he was portrayed by Anthony Hopkins in the film “The World’s Fastest Indian”, released in 2005. The original Indian Scout remains in Invercargill as per Burt’s wishes, and is on display at the E Hayes & Sons hardware store.

Race Events scheduled for this year are:

NZ Beach Racing Champs
November 28th, 12pm, Oreti Beach, Otatara, Invercargill. This location, incidentally, is where Burt did most of his testing in preparation for Bonneville.

For all information, maps, and entry forms please visit www.burtmunrochallenge.com/index.php