Roaring into cinemas this weekend is Pork Pie, a remake, or “re-imagining” of Goodbye Pork Pie (1980), New Zealand’s cult classic road/buddy movie. In the original, an opportunistic young hoon rents a yellow Mini in Kaitaia, Northland, using a “found” driver’s licence (before photo ID’s), and is soon joined by two passengers of similarly anti-authoritarian disposition. Pursued by a mounting number of police, the trio set Invercargill as their target and leadfoot it the full length of the country. Chronicled by massive press coverage as “The Blondini Gang”, they are aided by members of the public who view them as harmless underdogs in the manhunt. The movie was made on a shoestring, but enjoyed tremendous commercial success on its release and is still fondly remembered today. 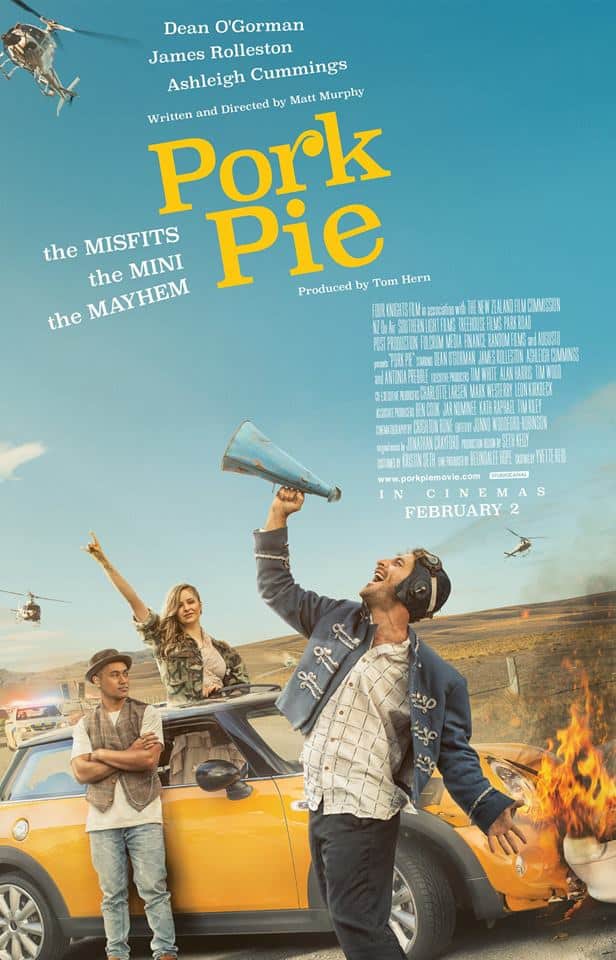 Pork Pie (2017) echoes the same basic storyline, and is written and directed by Matt Murphy, son of Geoff Murphy who co-wrote and directed the original.  For this outing a new Mini Cooper S is the star, and BMW cheerily supplied four of them for the production – from their viewpoint a feature length ad for their car. It is therefore no surprise that the project began as a marketing ploy by Mini/BMW New Zealand in 2014 when they recreated a Goodbye Pork Pie chase scene around Lake Hawea, Otago as a one minute ad to promote the third generation of their Mini Hatch. Director Matt Murphy was an appropriate choice for the scene, as his career has been as a director of adverts rather than cinema. Mini’s marketing manager Simonne Mearns confessed that generating attention for the new model was a challenge as it was outwardly very similar to previous versions, so associating the new Mini with an iconic Kiwi film (“our Italian Job“, says Simonne) gave them “a reason to talk about the car”.

The advertising campaign was successful enough on social media to lead to the full scale remake, again with Matt Murphy at the helm, and starring Dean O’Gorman (The Hobbit), James Rolleston (Boy), and Australian actress Ashleigh Cummings (Puberty Blues).

There is a long list of  filming locations in the movie, which were mostly shot in sequence from north to south. Among the notable ones are a recreation of the scene at the Wellington Railway Station, where on March 26, 2016 a Mini was driven into the station, along a platform, up ramps and into a rail car. The trail of media coverage details filming stops in Otago: Naseby (April 22), Roxburgh (April 23), then Kelso and Wyndham (April 27) where Rodger’s Garage was renamed Andy’s Garage for the occasion. Scenes at Andy’s featured a cameo from local TV personality and Invercargill mayoral candidate Tom Conroy as “Sam the mechanic”.

Following a stop in Gore the project was in Invercargill by May 1, where an enthusiastic local council contributed $50,000 to the production. A crew of several dozen people closed off parts of the city centre for a chase scene from Kelvin St to Tay St and the Trooper’s Monument (at the roundabout of Tay St and Dee St), and in Dee St, travelling from Tay St to Don St. Several local Mini owners were also approached about including their cars in the film’s final scenes.

Early reviews have been mixed, so it is up to the individual viewer to decide whether to regard the film as a loving tribute or cynical commercial hijack of a Kiwi classic.