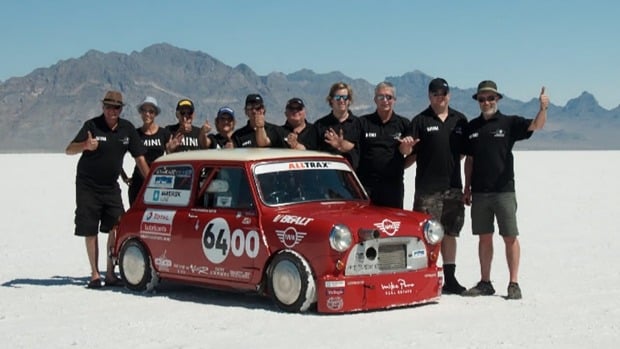 These guys will have had almost all their thunder stolen by the hubbub of the Olympics, so let’s give them a bit of attention.

Project ’64 is a team of Kiwi’s who last week broke two under-1000cc land speed records at Bonneville Speed Week, driving a 52 year old Mini Cooper. The car proved to be immensely popular at the iconic Salt Flats event in Utah, even though the Mini was not a huge seller in the US. Nostalgia for the everybody-used-to-have-one runabout stirred up plenty of support at home, and most New Zealander’s will fondly recall the yellow one immortalised in the 1981 road movie Goodbye Pork Pie, a remake of which is rumoured to be in the works this year.

Old info on the technical aspects of the car from the time of their 2012 Bonneville campaign appears on Wikipedia:

“The Project ’64 car was built from a rusty Cooper S, with repaired parts of the body shell coming from a similarly aged Morris 850. A roll cage to conform to SCTA requirements for record runs was added. The short-stroke 970 A-series Cooper S motor was bored to 998cc and modified with a BMW K1200R motorcycle twin cam 4 valve per cylinder head, fuel injection, and an IHI turbocharger and intercooler. The modified engine delivers approximately 286 bhp (213 kW) on pump fuel and 328 bhp (245 kW) on methanol. The aerodynamics of the chassis was optimised and 12 inch Yokohama tyres rated for speeds up to 150 mph (240 km/h) were fitted. The body is stock apart from a front spoiler, smooth undertray, modified grille and ducting for the air intake.”

The Project ’64 website claims that in its 2016 tune the tiny powerplant was producing 330 bhp on pump petrol. The driver for both seasons was Nelson Hartley, brother of F1 Mercedes racer Brendon.

Congratulations to the team on their extraordinary achievement!