Part One: One Tree Hill, the Hill With No Tree. 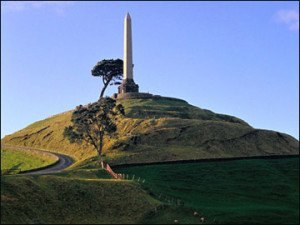 Now you see it…

Not so far from Auckland’s city centre lies Cornwall Park, an unfeasible 540 acre expanse of fields, gardens, and tree-lined avenues that worship at the foot of a small mountain.   At 182 metres high, One Tree Hill ranks as Auckland’s second highest mountain after Mount Eden (they are within sight of each other), but that’s like saying Sleepy was the second tallest dwarf.  Auckland’s history of volcanic activity has scarred it with a kind of geological acne, an outbreak of numerous but relatively small peaks barely deserving of the title “mountain”.  New Zealand’s tallest actual mountain, the South Island’s Mount Cook, is 3,724 metres high, if you need further perspective on this.

Known also by the Maori name of Maungakiekie, One Tree Hill was once the largest pa (fort) in the region, and for a time in the 1700’s it was occupied by up to 5000 members of the Te Wai o Hua tribe.  From a defence point of view it was hard to beat: its location and height gave them (and us) a view of Auckland’s two harbours – the Waitemata to the east, and Manukau to the west – and a 360 degree panorama of Auckland.  Seafood aplenty then, and the fertile volcanic soil proved easy to farm.  Defeat by a rival tribe led to the abandonment of the pa by the end of the 18th century, however terraces from the time of Maori occupation are still clearly visible today. 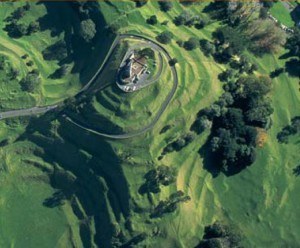 Aerial view of One Tree Hill, clearly showing the terraces sculpted by Maori, providing space for houses and vegetable gardens.

At the time of the founding of Auckland City in 1842, a single pohutukawa tree adorned the Maungakiekie summit, giving the hill its European name.  However, this was cut down in 1852, and repeated attempts to grow any kind of native tree in its place failed.  A pair of radiata pines, planted in the 1870’s, proved more tenacious, and for nearly a century One Tree Hill was, if we’re being pedantic, two tree hill.  Sadly, but appropriately, one of the pair was chopped down in 1960.  It is unknown whether these early attacks were for firewood, or simply acts of vandalism, but damage caused in 1994, and again in 2000, was the work of Maori activists seeking to draw attention to (in their view) injustices against Maori by the New Zealand government.  Despite efforts to save it, the remaining tree was removed on October 28th 2000, due to safety concerns.  The Auckland City Council has intentions to replace the icon, probably with a grove of pohutukawa and totara trees, but these plans have been shelved until disputes by local Maori over Treaty of Waitangi claims have been resolved.

Although you will not see a tree on the summit of One Tree Hill, the views of the surrounding parks, suburban Auckland, Mount Eden and Mount Wellington, both harbours, and Rangitoto Island, are spectacular and highly recommended.  A small water reservoir, constructed in 1900 and now disused, is visible on the summit’s western peak.  Five newer ones have been built underground to replace it.  Under the towering obelisk, pause at the grave of Sir John Logan Campbell, who as a young man gave One Tree Hill its name, and as an old man gave the city much of the surrounding land.

The summit is closed to vehicles after dark to discourage carloads of partying youths, but walking up is permitted.

In Part Two we will take a ramble through the acres below, and spare a paragraph or two in memory of their donor, Sir John Logan Campbell.  Check back soon.

Find your way there using this map.