Last Port of Call – The Strange Fate of Fairmile 406

July 5th, 2006, Tauranga Harbour, New Zealand. The long slender hull of a World War II submarine chaser is hoisted by a pair of cranes and hangs, blackened by mildew and marine growth, raining putrid bilge water onto the dockside. Hours later, settled upon a monstrous steerable trailer, she was ready to begin the 150km (94 mile) two day journey inland to her final destination in Waitomo for conversion to a novelty motel unit. So ended the seagoing career of ML406, naval patrol boat and long-time Auckland ferry.

At the outbreak of the second world war, the Royal New Zealand Navy relied entirely on requisitioned private motor boats for coastal patrol, harbour defence and minesweeping activities. However, these were mostly small, slow, inadequately armed, and of very limited threat to the enemy. To defend our ports from the perceived threat of Japanese submarine attacks it was considered vital that fast, purpose-built craft be commissioned, and after much consideration the British Fairmile B design was chosen. Among its advantages was its kitset construction, whereby frames and bulkheads could be prefabricated by furniture makers, or any other commercial woodworking firms, and shipped anywhere in the world to be completed by local boatbuilders. Once the frames were erected on the slipways, planking would be done using local timbers. This enabled the boats to be constructed quickly and easily, requiring fewer skilled labourers, as these were in short supply.

July 1943, Waitemata Harbour, Auckland. Sea trials completed, ML406 is commissioned into service in the RNZN. One of twelve identical boats built in Auckland (numbered ML 400-411), she had just been completed by Associated Boatbuilders using the world’s finest boatbuilding wood – native New Zealand kauri. Fitted with a pair of V12 Hall-Scott Defender petrol engines, the narrow 112 foot boat could achieve 20 knots (37km/h) flat out, and was fitted with guns fore and aft, twelve depth charges and an ASDIC sonar device. Crews consisted of sixteen sailors. The image of these craft patrolling in formation, v12’s at full stink, peaked caps visible on the exposed bridge, all weapons manned and Rangitoto Island in the background, is still a stirring one.

Once all twelve boats were launched and commissioned the fleet was divided into two flotillas, 80th and 81st, with the 81st flotilla initially sent south to Wellington to protect the Cook Strait and port approaches. Being part of the 80th flotilla, ML406 remained Auckland-based, patrolling coastline as far north as Whangerei. Unfortunately, due to bureaucratic delays and material shortages, by the time the Fairmile building program was completed the likelihood of submarine attacks seemed to have passed. This realisation led to Admiral Halsey, US commander of the South Pacific Allied Forces, ordering both flotillas to make passage to Renard Sound in the Solomon Islands, where they would serve under the command of the US Navy, performing anti-submarine patrols and relieving American destroyers and patrol craft for other duties.

In early 1944 all ships and crew were urgently outfitted for service in tropical climates, and ML406 was in the first batch of boats to leave New Zealand. On February 7th, 1944, she and four other Fairmiles departed Auckland on what was to prove a punishing journey, with a final farewell and refuel at Whangaroa Harbour, then on to Norfolk Island, Noumea, and Espiritu Santo, before finally reaching Renard Sound in the Russell Islands on March 9th.

Patrols went without enemy contact for the sixteen months the boats were stationed in the Solomons, however the crews were kept busy with the great deal of maintenance required of these light, fast vessels. Minor accidents such as stranding on reefs were recorded by some Fairmiles, and there was always the extreme danger of petrol explosions, but all the NZ boats lived out the war relatively unharmed. Returning to Auckland in July 1945, the fleet of “little ships” was decommissioned and mothballed on moorings at Greenhithe (then called Pine Island) in the upper reaches of the Waitemata Harbour. All eventually had their V12 engines removed, and all but one (ML411) were sold off in 1946-47 by the War Assets Realisation Board.

Offered up for tender in October 1946, ML 406 was purchased by Dunedin car dealer, auctioneer, and entrepreneur Rodney Farry, who fitted twin Graymarine 6-71 diesels and converted her into a passenger vessel. Modestly christening her Rodney Farry, she operated chartered cruises around Otago Harbour until she ran aground on a sandbar, causing Rodney Farry the first to lose interest in the concept.

Re-named New Venture in 1949, she was steamed back up to Auckland in a near tragic voyage. Under the command of a temporary crew, she struck a violent storm off the Castlecliff Coast, near Whanganui. Rather than heading out to sea, the terrified and inexperienced sailors chose to hug the coastline, with very nearly fatal consequences for both men and ship.

Re-named yet again in 1950, this time as Motunui, she was acquired by the Waiheke Shipping Co. and set to work as a passenger ferry from Waiheke Island to downtown Auckland ferry terminal, plus fishing excursions around the Hauraki Gulf. In February 1965 Waiheke Shipping, with assets including the ferries Motunui and Baroona, was bought by North Shore Ferries Ltd., and following a refit the Motunui continued its daily trudge from Auckland to Waiheke Island, blending in with the other workhorses on the Waitemata. Thirty-something years of service as an Auckland ferry finally ended when North Shore Ferries sold her into private ownership in 1984.

As with many boats of this size and age, the succession of owners over the next twenty years found they had bitten off more than they could chew. By 1997 plans to have her brought to survey standards in time to be used as a sight-seeing boat for the America’s Cup were abandoned when the relationship between the joint owners (and several suppliers) soured. Although much work was done – including fitting an original wheelhouse salvaged from ML411 – major issues were avoided, as the rates for hauling or slipping a 34 metre ex-warship pile up quickly. The twin diesel engines really needed overhauling. Pitted prop shafts, worn propellers, all expensive items. Damage to the starboard bow had resulted from decades of contact with the wharves during docking, and freshwater leaking down through the deck joint had rotted the inner layer of planking, leaving her only fit for sheltered waters.

I was aboard her in her latter days afloat, for sale in the old Viaduct Basin when the place still ponged pleasantly of fish and diesel, and then visiting a new owner on the Tamaki River, where she dwarfed all the private launches. She was cared for well enough then, but was sold on again in 2001 and took up residence in Mercury Bay, Whitianga, where the decline seemed to continue apace. In June 2006 she found yet another buyer, and made one final voyage, one last lazy daytrip, idling gently down the coast to Tauranga so that her machinery could be removed, and the butchered, buggered superstructure chainsawed away in preparation for the big lift. 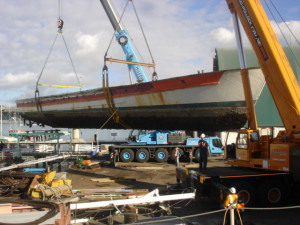 The final buyer was Barry Woods, a.k.a. Billy Black, who operates the curious Woodlyn Park accommodation in Waitomo. At the time, his motel units included a railway carriage, a Bristol Freighter airplane, and two “Hobbit Holes”. They now include a WWII patrol boat, which is advertised as the “Waitanic”, containing five separate units.

If you’re passing through and do decide to book a “room”, you can lie in bed and conjure up the long-dead khaki figures, hands working absently at well-drilled tasks, wise-cracking at 20 knots in a haze of hot exhaust and blazing Pacific sunshine. Or you may prefer to imagine the hundreds of less dashing men, women and children, who trod the diagonally planked kauri decks every day on the Auckland-Waiheke service, and who will always remember her as the Motunui. 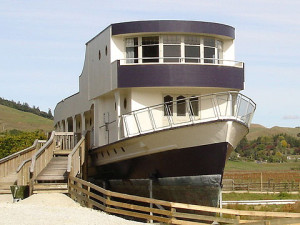