In February 2017 over 600 pilot whales beached themselves at Farewell Spit, a fin-shaped headland at the northern tip of the South Island. It is the second-largest whale stranding in New Zealand’s recorded history, after the 1918 stranding of 1,000 whales on the beaches of the Chatham Islands.

The reason for the stranding is unclear; whales can become disoriented in shallow waters, or get into difficulty chasing food in a retreating tide. Bite marks on one of the whales suggests that they may have been driven in to the shallows by a marauding shark. Once stranded rescuing them is problematic, as whales in distress cry out to the rest of the pod for help, causing re-floated mammals to return to the beach. In addition to physical injury and blowholes blocked by mud or sand, heat and anxiety can kill a stranded whale.

We recount the rescue timeline.

Early morning: A pod of 416 pilot whales, spotted swimming offshore the night before, were discovered beached at Farewell Spit in the early daylight hours. It was thought that as many as 250 were already dead. These were marked with an “X”, and survivors tagged so that they could be monitored.

Over 500 volunteers attempted to keep the surviving whales cool and comfortable for the rest of the day, the next high tide would be during darkness and it was not possible to help the whales at night for safety reasons. Therefore efforts were focused on the high tide at lunchtime the following day. 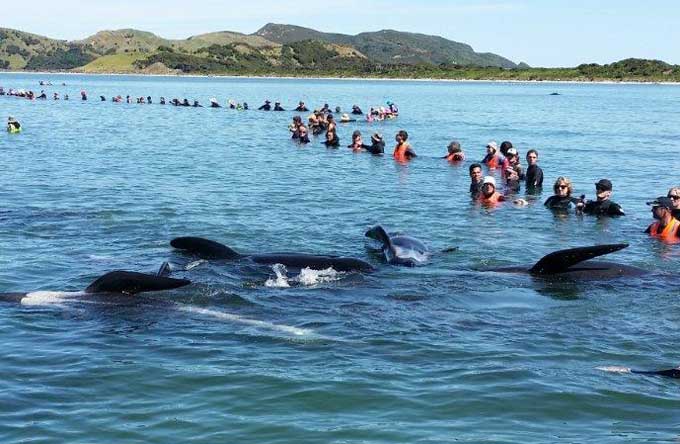 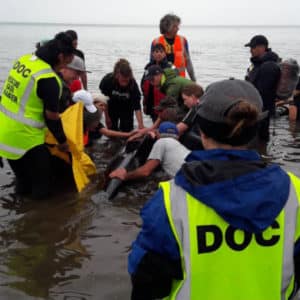 10.50am: DOC workers and volunteers prepare for high tide.

11.30am: 100 whales were re-floated at high tide. 100 volunteers made a human chain in the water to discourage their return to the beach. A further 200 volunteers remained on shore. A second pod of about 200 whales was spotted milling about nearby, and 80 of the re-floated mammals joined them.

2pm: 20 whales unfortunately beached again and had to be euthanised due to stress or injury. DOC considered the likelihood of saving them in their worsening condition to be remote and didn’t want to prolong their suffering.

5pm: Tragedy as the second pod of about 240 pilot whales, including many that had been re-floated successfully, stranded themselves on the beach in spite of the best efforts of volunteers. DOC called for more local volunteers, but only fit, healthy, wetsuit-owning persons, as they warned that they could not afford the distraction of caring for exhausted or emotional helpers.

11pm: The majority of the whales managed to re-float themselves on the high tide.

Early morning: 17 live whales remained on the beach, with the others swimming in the nearby shallows.

12pm The last 17 whales were successfully re-floated, with the help of volunteers, on the high tide. Two boats guided them to re-join the pod, which had happily begun moving east into deeper waters.

DOC monitored the pod which remained about a kilometre offshore and was in danger of re-stranding when the tide went out. DOC also began moving the carcasses of dead whales to an area of dunes that is closed to the public, using a digger.

1.30pm: Several members of the public saw about five whales starting to strand near Taupata Point, but were able to push them into deeper water.

Eight whales stranded at Taupata Point during the afternoon, and once again volunteers were on standby, keeping them cool and wet, pinning their hopes on the next high tide.

1am: The eight stranded whales managed to re-float during high tide, and by daylight no whales were to be found on the beaches of Golden Bay. No whales have been sighted near the shore since the previous day.

Although upwards of 200 whales died (many in the early hours before they were discovered) the majority were ultimately re-floated and have not returned. The saving of over 400 whales is thought to be one of the largest and most successful rescues in the world – a great result thanks to the efforts of the Department of Conservation, whale-saving charity group Project Jonah, and many wetsuit-clad volunteers.