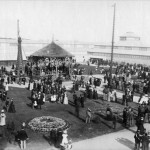 On this day in 1889, NZ’s very own Eiffel Tower opened for business. Only eight and a half months earlier, Gustave Eiffel had unveiled his elegant namesake as the centrepiece of the Paris Exhibition Universelle. … (read more)

This Day in NZ History: The Sea Devil

October 7,1917.  Count Felix von Luckner, known as the “Sea Devil”, arrives in New Zealand for internment in our very own POW camp, Motuihe Island. As captain of the sailing ship Seeadler, he and… (read more)