The ChristChurch Cathedral is an iconic heritage building located at the very heart of Christchurch city.  Once an instantly recognisable feature of the city’s landscape, it now lies in comparative ruins due to extensive earthquake damage.  Even though the Cathedral’s future remains uncertain, visitors are still able to view the site from a safe distance. 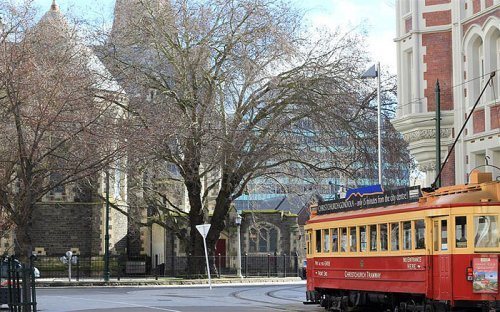 The CathedralOver the course of New Zealand’s history the Cathedral was regularly used for community events and various official occasions, but first and foremost the ChristChurch Cathedral has always been a place of worship.  Countless numbers of people have made their way through its doors in times of joy, sorrow or need.

Considered New Zealand’s best known church building the Cathedral is regarded by many as a symbol of the legacy left by early settlers to the Canterbury region.  Often admired for its Gothic Revival style architecture, the central part of the building was able to accommodate small congregations within the 30 metre long nave and a circular stone staircase lead up into to the dominant feature of the building, the Tower.

Standing a total of 63 metres high from the ground to the cross at the top, the tower and its spire were a popular tourist attraction, home to 13 bells rung on religious occasions and for special events and most of all a symbolic icon of the city of Christchurch for over a hundred years.

The high alter was flanked by wooden carvings of historical figures, and the pulpit with white alabaster carvings.  At the west end was the famous ‘Rose Window’ which represented the different orders of Angels, and underneath were the Venice made mosaics representing the six works of Mercy.

In the North Transept was a statue of the first Bishop of Christchurch, Bishop Harper and in the South Transept were two statues of St Michael and St George.  Alongside the Cathedral was a Visitor’s Centre designed by Christchurch architect Alun Wilkie.  Officially opened by the Queen in November 1995, the visitor centre was built to help accommodate the hundreds of thousands of  visitors who visited the Cathedral annually.

The first Cathedral cornerstone was laid on 16 December 1864 sparking the beginning of a colourful 40 year journey to its final completion in 1904.  It was originally designed by English architect Sir Gilbert Scott, with Benjamin Mountfort the supervising architect from 1873 onwards.  Mountfort was responsible for redesigning the spire and various other modifications including adding tower balconies, the west porch and decorative details such as the font, pulpit and stained glass.

The initial design of the Cathedral called for construction from wooden materials but this was altered when the discovery of a good local source of stone was made. Timber sourced from Banks Peninsula was used for the roof supports.

Financial problems saw construction delayed between 1865 and 1873 due to the then small town of Christchurch being unable to raise sufficient funds.  The nave and tower were finally consecrated in November 1881, but the Transepts, Chancel and Sanctuary were not finished until 1904. The final cost of the project at the time was around £65,000.

The tower was originally home to ten bells back in 1881, these were replaced in 1978 by 13 new bells, the heaviest of which weighed 1.77 tonnes.  The bells were all cast by John Taylor & Co of Loughborough.

Repeated earthquakes over the years have caused continuing damage to the Cathedral.   Most notably in the years of 1881, 1888, 1901, 1922, 2010 and of course the 2011 Christchurch earthquakes.   The February 2011 quakes completely destroyed the spire and parts of the tower, while severely damaging the structure of the remaining building.

The series of violent quakes cracked pillars, twisted and smashed walls and shattered the beautiful stained glass windows.  Beyond repair and a serious hazard the remainder of the tower was demolished in March 2012.

In a controversial decision in early 2012 the Anglican Church decided to demolish the entire building and replace it with an entirely new structure, mostly due to concerns over safety and the costs of rebuilding.  Various groups have opposed the church’s intentions, with no further demolition occurring since.

The New Zealand Government intervened in 2015 by appointing an independent negotiator, with the result being the Anglican Church now considering the possibility of restoring the building.  Whatever the outcome it is clear what remains of the ChristChurch Cathedral faces an uncertain future.

Designed by architect Shigeru Ban, winner of the 2014 Pritzker Architecture Prize, with the added support of associate architect Yoshie Narimatsu, who contributed their time free of charge and gifted the building’s design to the city of Christchurch.  With many of the building materials sourced locally and nationally, the Cardboard Cathedral is not, as the name suggests, just made from cardboard, it is constructed from a variety of materials, including 120 kilogram cardboard tubes, timber beams, structural steel and concrete.

Need transportation to make the most of the area? View our full range of affordable Christchurch rental cars and explore the best of Christchurch at your own pace.

Back to Christchurch Photograph Gallery

Explore Christchurch at your leisure with budget car hire from NZ Rent A Car.